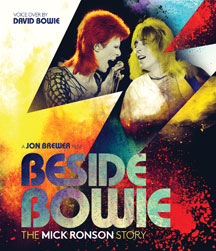 With exclusive voice-over contributions from David Bowie, this film is a celebration of the life and works of guitar virtuoso Mick Ronson, a rock hero virtually uncelebrated despite his direct contribution and involvement in countless compositions, lyrics and recordings that changed the face of music forever.

An Emperor Media Ltd production, documentary special Beside Bowie: The Mick Ronson Story(101:50 minutes) is from award-winning producer/director Jon Brewer. Mick Ronson’s humble beginnings in Hull, England underpinned his values and modest, unpretentious personality as he worked with the city’s council whilst pursuing his craft with consummate dedication.

Soon word of his talent reached David Bowie, who grabbed at the chance to work with Ronson, in what would become a career-long association, alongside collaborations with other greats such as Bob Dylan, Ian Hunter, Lulu, Lou Reed, Morrissey and John Mellencamp. The Man Who Sold the World, Aladdin Sane, Hunky Dory, The Jean Genie – all were constructed with Ronson on guitar.

Sadly in 1993, while working on a solo album, Ronson passed away before receiving the recognition he so richly deserved or before taking that final bow. Now, with unprecedented access to archival backstage footage – never before released – and iconic imagery from superstar photographer Mick Rock, this fascinating and at times controversial special reveals the ultimate authentic chronicle of the career of a cornerstone of rock.

Producer and director Jon Brewer commented, “Both Mick Ronson and David Bowie together were the ultimate duo. They performed and recorded like magicians and created masterpieces that will live on forever.”

Beside Bowie: The Mick Ronson Story is distributed in the US by MVD Entertainment Group via Blu-ray + DVD, transactional video on demand, and download to own rights from international distributor Content Media following the Parade Deck Films theatrical release .