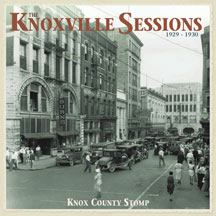 The ARSC is pleased to announce that Bear Family’s book by Tony Russell and Ted Olson, The Knoxville Sessions, 1929-1930: Knox County Stomp, has won a Certificate of Merit in the 2017 Association for Recorded Sound Collections Award for Excellence in Historical Recorded Sound Research in Country Music. The award will be presented at a ceremony on May 12, 2018, during ARSC’s annual conference in Baltimore, MD. Additional information about the conference and the ARSC Awards for Excellence can be found at www.arsc-audio.org.

Begun in 1991, the ARSC Awards are given to authors of books, articles or recording liner notes to recognize those publishing the very best work today in recorded sound research. In giving these awards, ARSC recognizes the contributions of these individuals and aims to encourage others to emulate their high standards and to promote readership of their work. Two awards are presented annually in each category, for best history and best discography, and several others are acknowledged with Certificates of Merit. Awards are presented to both the authors and publishers of winning publications.