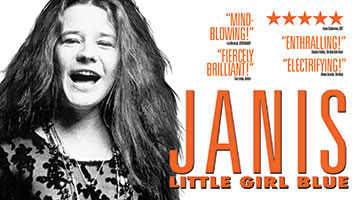 According to The Examiner, The PBS broadcast version will include a never-before-seen extended film cut with additional archival performance footage along with new interviews of her sister Laura Joplin and musicians who were influenced by the singer, including Pink, Juliette Lewis, Melissa Etheridge and Cat Power (Chan Marshall), who narrates the film and performs the Joplin song “A Woman Left Lonely” in tribute in the film.

“Janis: Little Girl Blue” also includes interviews with her brother Michael and friends and lovers, including Big Brother and the Holding Company band mates Peter Albin, Sam Andrew and Dave Getz; Bob Weir of the Grateful Dead; Country Joe McDonald of Country Joe and the Fish; singer-composer Kris Kristofferson; TV host Dick Cavett and record executive Clive Davis. Also included is new audio and video of Joplin in concert and in the studio, plus rare footage of her emotional return to her hometown of Port Arthur, Texas for a high school reunion.

MVD will release the DVD on May 6th. It will include bonus features such as an a capella performance with Big Brother and the Holding Company and footage from Janis’s posthumous Hollywood Walk of Fame ceremony.