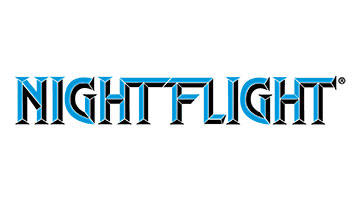 Night Flight is announcing today the addition of its premium subscription channel, Night Flight Plus, offering up original uncut air masters of Night Flight programming from the video vaults of the 1980s TV show, as well as an extensive library of entertainment from their partner, MVD Entertainment Group.

Night Flight Plus features a library of original content that has not been broadcast for over 30 years. Subscribers can revisit episodes of Night Flight transferred from the original USA Network air masters with exclusive interviews and specials, including features like the four hour 1983 New Year’s Special and Best of New Wave Theatre.

Night Flight Plus will be offering up new releases every weekend of original uncut episodes from the Night Flight vault. In addition to the original material, Night Flight is developing unique artist channels, the first of which being the short film collection from Seinfeld actor, comedian, and filmmaker Larry Hankin. These exclusives will be paired with hundreds of titles from MVD’s extensive library of music, horror, cult, comedy, and concert documentary films.

A Night Flight subscription is available in two options: $2.99/month or $29.99/year and compatible with Chromecast, and Roku. Apple TV and Amazon Fire TV are right around the corner.

Founder Stuart S. Shapiro stresses this isn’t strictly a subscription, saying: “We’re treating it like a membership to an exclusive club – A Rite of Passage – A trigger of never ending emotional nostalgia.”

MVD’s CEO, Ed Seaman added, “Many of us at MVD grew up with Night Flight.  Some of us even remember those days… Night Flight Plus provides vast programming targeted to the counterculture.  The SVOD leaders have largely abandoned the kind of selection that appeals to this market.  Night Flight Plus fills that void, and then some.  We are so proud to be working closely with Stuart Shapiro and his team, and especially proud to be affiliated with such a strong brand as Night Flight.”

The original Night Flight TV series aired all night long on the USA Cable Network on Friday and Saturday nights. The show was the creative brainchild of Stuart S. Shapiro, who created the show – premiering on June 5, 1981 – with the idea that it would be, in his words, a “beacon of fresh cutting edge entertainment that was just not available anywhere on TV. It was the true essence of the birth of Cable Television.” Night Flight featured classic interviews with all the major music and cult stars of the 1980’s from Ozzy Osborne, Lou Reed, BB King, Frank Zappa to Divine, The Residents and Mark Hamill. VH1 recently called Night Flight: “The single greatest rock omnibus program ever aired.”

Night Flight launched their retro video blog, Nightflight.com, on May 1st, 2015, and have been offering daily content, including in-depth blog posts which run the gamut from the nostalgic trips back to the Night Flight tape vaults to unearth classic 80s clips, to searching for the under-the-radar brand new things they think you should know about, offering up exclusive interviews and features you won’t find on other video blogs.

Of this next step, Shapiro writes “Our goal with Night Flight Plus is to resurrect the editorial spirit of Night Flight with the same original curatorial edge we had in the 80s for a new digital generation. This time around Night Flight’s special brew will be available anytime – anywhere.”

Night Flight Plus membership is a unique opportunity to become an active participant in the comeback story of one of the most memorable and important counter culture brands of the 80s.

Night Flight Plus is available at nightflightplus.com and the Roku store.

The promo video can be found HERE