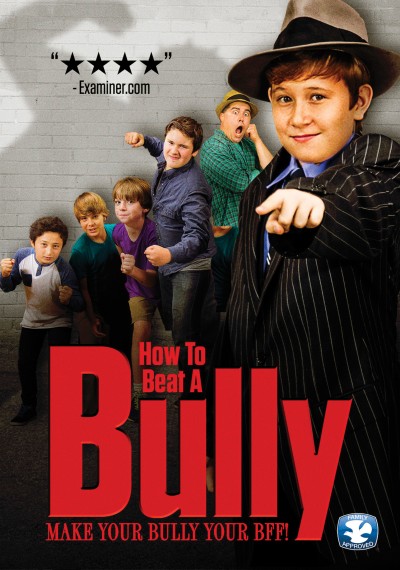 How To Beat A Bully

Cory had a problem with bullies… so he told them his dad was in the mob… now his dad has the problem!
“How to Beat a Bully” is about a 12-year-old boy who moves to a new town and gets picked on by school bullies. When his dad gives him lame fatherly advice, he realizes he has to come up with his own plan. After watching a TV show, the boy gets an idea. He fibs to the bullies, and tells them his dad is hit man for the mob! At first no one believes him. But then through a series of misunderstandings – the kids, their families, and the whole town is convinced it’s true. That’s because his dad is an Insurance Salesman who keeps telling people they need “protection” and to take out a “contract” with him. Adding to the mix-up, the newspaper boy overhears the dad on the phone, yelling that he wants them “dead and gone”…and “if you can’t do the killing right, I’ll get someone else.” The paper boy doesn’t realize the dad is talking to insect exterminators! Before long, everyone thinks the dad is really a hit man for the mob! As the rumor spreads, the bullies become the boy’s BFFs. Not only do they treat him with respect – they come to him with their problems and he doles out favors on the schoolyard like a little Godfather. Matters escalate when word reaches two real mobsters hiding out in town, who think the dad is horning in on their turf. They capture the dad, and plan to tuck him in for a permanent dirt nap. When the boy realizes his dad is in trouble, he gathers up his bullies-turned-buddies, and calls in the “favors” they owe him. Together, the boy and his new friends battle the bad guys and save the day…and his dad. Oh yeah, and they all agree, “It’s better to be buddies than bullies!” This is a cheerful “Home Alone” type comedy with an anti-bullying theme that can open up a discussion and help create awareness of this important topic.It’s a heartwarming, fun and funny movie with kids and unexpected twists, turns and misunderstandings – that should appeal to both children and adults.